Liquefied Natural Gas (LNG) is fossil gas that has been cooled down to liquid form for storage or transport. Fossil gas is mainly converted to LNG for transport over the seas. Our two page briefing document on LNG is available at the end of this page for more information.

Currently, there are three LNG projects planned for the Republic of Ireland; one in Shannon and two in Cork. 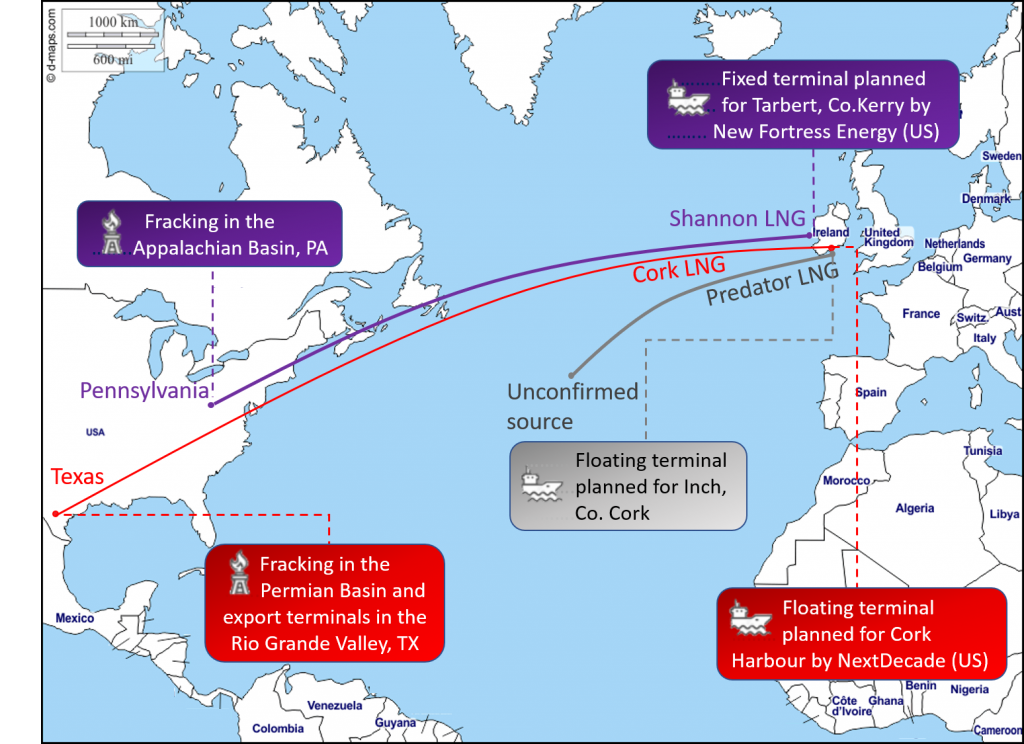 The Shannon LNG terminal is planned for Shannon Estuary near Ballylongford and Tarbert in North Co Kerry. While in Cork, The Port of Cork Company signed a Memorandum of Understanding with NextDecade Corporation to develop an LNG import terminal in Cork Harbour and finally, Predator LNG Project planned for Inch in Co Cork.

The Shannon LNG project has been in development since planning permission was granted in 2008. In 2018, An Bord Pleanala extended planning permission to a company called New Fortress Energy to build an LNG terminal on the Shannon Estuary in Ballylongford, Co. Kerry. The Shannon estuary is a Special Protection Area for waterbirds, whales, dolphins and porpoises. In other countries, numerous leaks and accidents have proved the destructive impact of fracking and LNG on the environment, climate and public health. The terminal would import fracked gas from the Appalachian Basin in Pennsylvania, US, and Not Here Not Anywhere is working with communities here affected by fracking. As of early 2020, three legal cases have been taken in relation to Shannon LNG by Friends of the Irish Environment and one of these is preventing any work beginning on the project.

*Update: In January we received the fantastic news that the Memorandum of Understanding (MoU) between the Port of Cork and NextDecade energy to develop the Liquefied Natural Gas (LNG) terminal in the Port area has expired at the end of 2020 and Port of Cork stated that they have no intention to renew it.

This is a big victory for LNG campaigners both in Ireland and globally, and it is through all of our combined hard work that it was achieved. This was a coalition of grassroots groups, individuals, NGOs, and politicians. We have all played a crucial role. It included everything from petitions, demonstrations taking place around the country and abroad, civil society sign-on letters, motions within Local Authorities in Cork, public events sharing testimonies from affected communities in Texas and the work of Politicians within Dáil Éireann all putting pressure on Port of Cork. With each decision like this we erode the social licence of this industry and prevent new markets for their dirty fossil gas.

Not Here Not Anywhere will continue to work with our allies globally and in Ireland as the next step in our campaign is to get legislation passed in Ireland that will ban the construction of all LNG terminals which would ensure any of the other four projects planned here would not go ahead.

In 2017, Port of Cork signed a Memorandum of Understanding (“MoU”) with NextDecade, an LNG development company in Texas, United States. The MoU allows Port of Cork to negotiate with NextDecade on the development of a new Floating Storage and Regasification Unit (FSRU) and associated LNG import terminal infrastructure in Cork Harbour.

The campaign against Cork LNG has been active since 2019, and actions to date have involved Not Here Not Anywhere, Cork Green Party, and Extinction Rebellion Cork. There is an ongoing petition against Cork LNG which 3,500 people have signed (Uplift.ie, 2019a) and in December 2019 an open letter signed by 50 international civil society organisations was delivered to Port of Cork (Not Here Not Anywhere, 2019). In November 2019 resolutions against Cork LNG were passed almost unanimously by Cork County Council (Ryan, 2019) and Cork City Council (English, 2019).

Predator Oil and Gas Holdings Plc has stated its intention to develop a Floating Storage and Regasification Unit (FSRU) terminal in Inch, Co. Cork, to import LNG from conventional, non-fracked sources. This project is similar to the type planned for the Port of Cork. A new company has been established Predator LNG Ireland to advance the FSRU project.

The company has already met with the Department of Communications, Climate Action and the Environment and the Commission for Regulation of Utilities in relation to this project.

According to Predator LNG Ireland, the project installation and commissioning of the FSRU could be done within 18 months and can receive its first deliveries of LNG in late 2023. The company has bragged that its “frontrunner to be a new entrant to Irish gas market”. The project can use existing infrastructure from the Kinsale Gas Field.

Not Here, Not Anywhere

Today we ended the public aspects of our #ditchthe

We're live in the Green Zone at #cop26 today! Com

The ghastly nasty lies of LNG. Spooky stories from

To the people of Tipperary: until this Friday, the

This will be a big week for our climate targets an

To the people of Sligo: until this Friday, the cou

Brian speaking at the Climate Rally with @extincti

We are delighted to announce we are launching a ne

The heatwave may be over, but the summer of county

To the people of Kilkenny: until the 28th of July,

Have your say to make our counties fossil free! Su

The Not Here Not Anywhere #energypoverty and a #ju

Link to register for our energy poverty webinar is

We have published a briefing on LNG in 10 page an

Don't forget to submit to the Dublin City Council

Join us in submitting to the Dublin City Council D